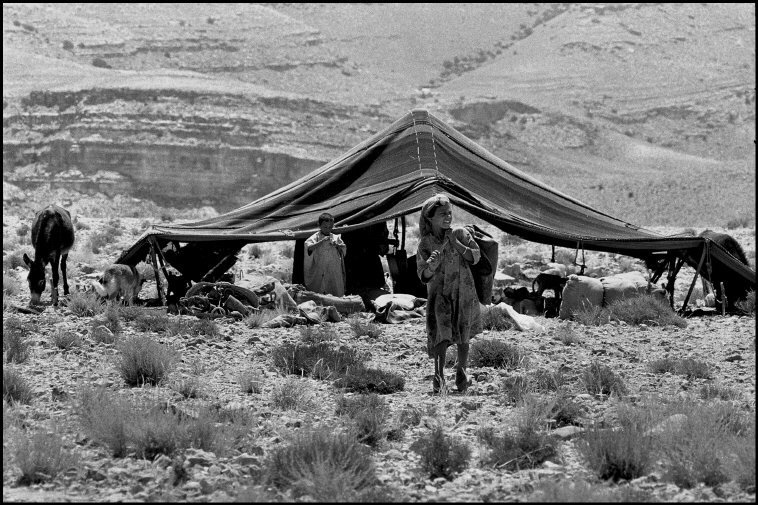 The Winds of the Aures / ريح الاوراس (Mohammed Lakhdar-Hamina, 1966) works as a great prequel to the famous production Battle of Algiers (Gillo Pontecorvo, 1966). It takes place in the Aures, a region in north-eastern Algeria where the first gunshot of the independence war was sounded. Because of its strategic geography bordering Tunisia, guerrilla fighters called it Wilaya I (“Province I”). Filmed only four years after Algeria won the war, the movie focuses on heart-tugging mother-son relationships during a period of oppressive foreign rule.

This black-and-white film opens up with a man leading prayer. Islam played an integral role during the infant stages of anti-French rebellion. While the film doesn’t focus on the war that sprouted in 1954, it captures life in these desert-edge mountains. It moves slowly, but we eventually witness the crucial bond between mother and son, and the psychological impact of being forcibly separated. Before the sons are sent off to work in the fields for the colonial government, their mothers try to cling onto them as much as they can. The sons reassure them that they will be rejoined, and may even come back as dignified soldiers of the anti-colonial cause after they safely attend to commands.

When the men are officially off to labor and months go by, we watch the women lose their patience and sanity. One scene shows a great crowd of women in piercing white cloth, sitting on the ground in front of the S.A.S office or Specialized Administrative Sections, a French civil-military program. Their mission was to weaken nationalist sentiment among the indigenous population. Keltoum, the mother whose eyes we see through the most, loses her composure and rushes to the front. She holds a chicken by its legs, and the animal makes great noise and flocks its feathers. She keeps a strong grip and does everything to get attention from the men inside the building. Two French soldiers step out at the sound of commotion alongside an Algerian translator, who tells Keltoum and the rest of the women to settle down. It is in this moment we notice a crucial component to preserving colonial rule – forming an alliance with a handful of colonized people and using them as props to control the rest.

Once they let Keltoum inside, she inquires with desperate eyes where her son could be and when he is expected to return. The translator facilitates the conversation between them. The French officer is seen serenely smoking a pipe as she frantically asks for answers. He says nonchalantly that she ought to relax and stay home. She offers the chicken as a way to appease him, naively navigating the situation through her own social code and customs. He tells her to keep the chicken and sends her off.

Keltoum cannot sleep without knowing how her son is really doing, and sets off to look for him.

Keltoum walks for what seems like eternity, until she stumbles across a village where two other women invite her to rest inside their home. They exchange similar stories of emotional torment. It is from here we see three mothers tread dry terrain for miles to reach the camp their sons are confined in. Their sons cannot believe their eyes when they arrive, and use hand gestures from afar, in attempt to communicate to them that they should hurry on home. But they refuse, and sit behind a barbed wire fence, watching their sons dig for hours. A French solider periodically scolds the mothers from their watchtowers, but they do not budge.

For Mohammed Lakhdar-Hamina (best known for his 1975 film Chronicle of the Years of the Fire) to focus on a mother’s lens at the birth of a new nation is important.

One would expect the stories of women to be erased; the masculine dimension of martyship tends to reign supreme. But in The Winds of the Aures, we see raw vulnerability, we see the tender relationship between potential warrior and active caregiver. We see the bravery of these women captured by a traditional femininity, which is perhaps nowadays overshadowed by other ideals. Not once do they express fear of the French, they prefer to lock eyes with their sons, and with no means of protection at that, than to stare at the walls of their houses dreaming of an overdue freedom. Lakhdar-Hamina from M’Sila was inspired by his own family’s experiences.

There is no happy ending. The sons are taken away, and the mothers are forced to watch them disappear once more, this time indefinitely. The name of the movie comes into play. The wind blows aggressively, and the mothers wail. The sand obstructs all vision and their cries blur into the soundtrack. The film ends on this anguish. The director’s decision to leave the viewer’s heart clenched speaks to the brutal reality of colonialism and war. Mothers bid farewell to the men they’ve raised.