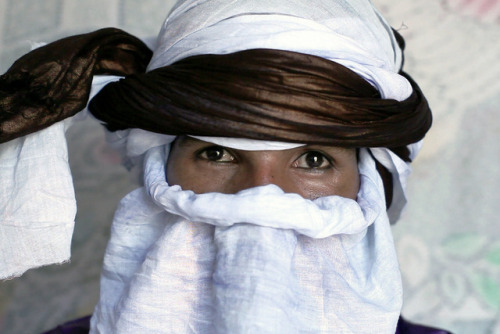 In 2008, he travels to Sokoto, Nigeria to record his debut album influenced by Haussa music. It proves to be a smash hit on MP3 networks across West Africa.

In 2013, he releases a compilation of songs recorded in Tchintabaraden, Niger.

Today, he balances between performing for weddings in Agadez to sold-out shows at the Sinclair in Cambridge.

Moctar, like other artists contributing to the Tuareg genre at an international scale, are sharing their music with starkly different audiences.

From Niger to North America, Tuareg music has made its mark in a variety of local music scenes. However, many of its listeners in the States may not be aware of the political or social ambitions that underpin many songs. People have the potential to discover a pluralistic Tuareg history once they look past the romantic dimension they can often be limited to.

Assistant Director of the African Studies Center at Boston University and PhD of ethnomusicology Eric J. Schmidt comments on the mystical portrayal of Tuareg artists in the media, “I think a lot of it has to do with marketing through the music industry.” Like many Tuareg artists who get signed by French or American labels, Mdou Moctar’s social media is largely administered by Western management.

Sitting in his office chair with albes (Tuareg “neck wallets”) hung on the wall behind him and his dissertation “Rhythms of Value: Tuareg Music and Capitalist Reckonings in Niger” sitting comfortably in the bookcase off to the side, Schmidt explains there is a purpose in “drumming up interest in these bands by selling a certain narrative that maybe isn’t totally untrue but distorts the truth or massages it a little bit.” He says, “There’s these really evocative phrases that people use and that’s part of what drew me to it in the first place.”

Language that intends to or offhandedly “exotifies” a culture is tricky to navigate, considering it can be successful in inviting listeners even like Schmidt himself albeit the fact he actually grew up listening to West African music, thanks to his brother who introduced it to him. He adds, “I think it’s very seductive from an American perspective. You have the legacy of rock n’ roll as protest music, it used to be seen as really rebellious and now you have guys who fought actual rebellions.”

Tuaregs from Niger and Tuaregs from Mali are attached to complicated political histories that have evolved differently, but certain common plights are synthesized in popular activism which is then realized into music. The well-known band Tinariwen founded by Ibrahim Ag Alhabib from Tessalit really set the stage for different upcoming artists.

It’s important to note that not all Tuareg musicians are directly issued from the experiences of former resistance fighters, like leader Ag Alhabib who witnessed his father’s execution at age four during the 1963 Mali uprising and later went on to fight in Libya. However, Tinariwen’s impact has been the lacquer top coat of Tuareg music culture. Their lyrics speak of exile and they would soon be, in the eyes of many, the face of Tuareg struggle.

Schmidt writes, “The group’s growing fame paved the way for many other Tuareg acts to achieve international recognition, such as Terakaft, Tamikrest, Bombino, Mdou Moctar, and Koudede.”

Benjamin Minniear, a passionate fan of Moctar’s latest album Illana (The Creator), says, “Prior to finding Mdou Moctar, I had listened to and followed Tinariwen, first their Amassakoul album, and then Emmaar and Elwan albums.”

Niger has legends of its own, from late Abdallah Ag Oumbadougou to Bombino. We see newer artists transcending terrain— as cliche as it sounds, the music itself has begun to reflect the nomadic life many Tuaregs are characterized by. Americans are discovering a variety of Tuareg musical styles because of the world tours these artists get the chance to embark on. On March 28, Moctar played at Mass MoCa in North Adams at the Solid Sounds festival. Bill Crosby who was front and center at the show says, “I was really excited to hear Mdou Moctar play…I am a fan of Tinariwen and Ali Farka Toure, Mahmoud Guinia, so this style of music with syncopated rhythms was not new to me.” While one would assume most American attendees stumble upon Tuaregs concerts on a whim, many of them have already acquired a taste for the music and are genuinely interested in the sound and ambiance.

Ishumar was a specific term given to Tuareg artists around the time Tinariwen took off. It referred to the music of the young, uprooted men who often wandered from town to town with their guitars. It derives from the French word chômeur, meaning an unemployed person.

While Moctar is known for a much more electric style of music than “desert blues”, he still belongs to the subsequent generations of young men and women who have adopted a musical craft as means of empowerment. The “common heritage” of ishumar songs continue to be performed regularly by Tuareg artists across the Sahel and Sahara, as do more recent compositions by younger musicians like Mdou Moctar.

In the mid-’80s Tuareg activists allied with the son of former and first post-independence President of Niger Diori Hamani. They perpetrated an unsuccessful attack against Moctar’s hometown Tchintabaraden, northeast of Niamey. Much more serious rebellious attempts were made a around the time Moctar was born, “as democracy was introduced in Niger following France’s conversion for multipartism in Africa after decades of support to monolithic authoritarian regimes,” said Yvan Guichaoua, Research Officer who has been studying Tuareg rebellions in Mali and Niger since 2007, in his publication “Circumstantial Alliances and Loose Loyalties in Rebellion Making: The Case of Tuareg Insurgency in Northern Niger.” The rebel project, envisaged before the Tchintabaraden massacres concretized when Moctar was an infant. Knowing this background story not only about Mdou Moctar but Tuareg artists in general enriches a listener’s experience. Nonetheless, many American fans attest to feeling the depth of the music without being particularly informed. Minnear shares, “Despite not knowing the translated lyrics, and this goes for Mdou Moctar too, the inflections of their voices and harmonies can really speak to me, just in how they sing it. I can’t really explain why, sometimes you don’t need to know exactly what’s being said to understand it.”

Younger generations of artists—emulating in particular the models of Bombino and Mdou Moctar – also showcase that the Tuareg genre isn’t exclusive to slow melodies but can also be done at significantly faster tempos like Moctar’s songs.

Luckily, many Tuareg artists with Western PR agents do a good job of attracting a global audience without relying on orientalist tropes sometimes used in news headlines and articles. Kendra Amalie, a fan whose fan-art was reposted on Moctar’s Instagram page, says, “Around the time Anar came out in 2014, a friend mentioned the Sahel Sounds label to me. I also use streaming music services and have faith in the algorithm to guide me when I’m too lazy to make my own way. Mdou Moctar’s music came up more and more frequently and when I put a name to the music I enjoyed I started to follow him and buy the music. He’s among my top 3 favorite contemporary guitarists and I love how he sounds backed by his excellent band.” Americans now have the opportunity to learn more about a part of the world they may have not taken a glance at before. Amalie says, “I’d only learned about the Tuareg people after coming across Sahel Sounds and Mdou Moctar.”

Contemporary Tuareg music is a new engine for expression, something beyond tisiwit, classical poetry that is sung alone or accompanied by the traditional anzad instrument usually played by women. Amalie says, “I’ve seen Mdou Moctar twice and Les Filles de Illighadad once. It’s celebratory and a relief. So much modern music is sterile, slow, rigid, pretentious, wallowing and corny. Tuareg concerts bring the magic back to live music. I want more!” While tisiwit is “exclusive” to Tuareg spaces, Tuareg music has been catapulted globally.

The typical atmosphere in Niger for these shows is very different from those in American settings. For one, in Niger, performances are planned much more “informally” in the sense that locals reach out to the artists personally or through mutual contact. If not for specific festivities, musicians can play out in the open and others may hear them from a distance and join them. This doesn’t pan out in the States where shows are designated a venue well in advance and people purchase their tickets online.

Of course, the ways in which the two audiences engage with the music physically will be different as well. In Agadez for example, and increasingly in Niamey, women often request jagwa, music meant for a Mauritanian dance, at bridal parties. Sometimes a separate Mauritanian band performs jagwa after a Tuareg guitar group, but as Schmidt notes, “In most cases, Tuareg groups perform jagwa themselves, particularly versions by Bombino and Mdou Moctar.”

Some of Moctar songs’ are also inspired by Islamic heritage, which is ironic since Westerners who attend Tuareg concerts are stereotypically known to be quite the drunk crowd. This is representative of some of the dissonance that occurs when an artist or group is performing outside of their base. However, by speaking to fans of Tuareg music and specifically fans of Mdou Moctar, a genuine interest and seasoned familiarity with the genre is clear, which may be a sign that bridging the gap between these audiences is possible insofar as non-Tuareg audiences can take their passion further and learn about the culture or history cushioning their music. Minniear talks about how he was captivated by Moctar’s work, “His playing, along with the band, is almost hypnotic, I know what’s coming, after listening to it so many times, but I can’t miss it. I have not seen him live yet, but intend to this spring, when he comes to my area, Iowa City, for the Mission Creek Festival.”

Today, the genre is composed and performed by all kinds of bands at a variety of occasions. Whether it’s urban festivals in California or rites of passage in Niger, Mdou Moctar is a part of this iconic Tuareg music continuum.