I belong to the Jbel Sheshar tribal confederation, and more specifically I am of the Banu Amrane located in Djellal. 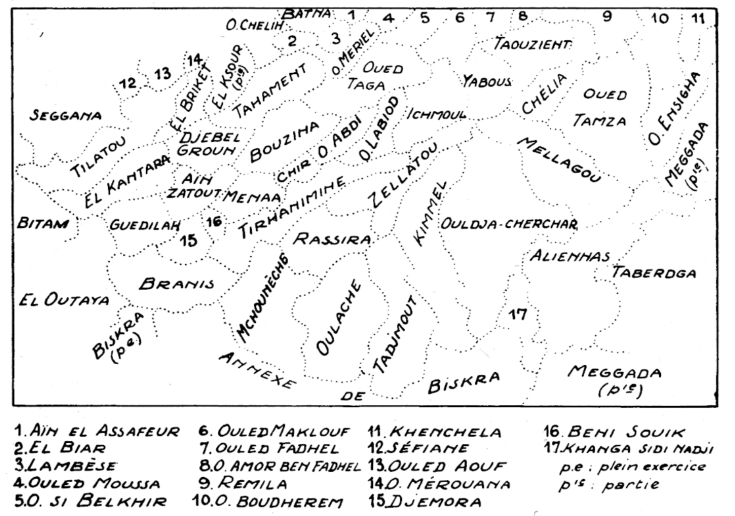 The Jbel Sheshar confederation made its submission to General Bedeau in 1845. Its leader, Si Mohamed Tayeb bin Nacer bin Sidi Naji, marabout of Khanga Sidi Naji, who at that time had religious influence and political authority, dissuaded his fellow believers from resistance. However, at the time of the siege of Zaatcha in 1849, a marabout of the Khiran zawiya (Aliennas) Si Abdelhafid preached jihad instead and appealed to the khouans of the Rahmaniyya order of which he was the moqaddem.

He gathered four to five thousand Shawis from the Jbel Sheshar confederation including those of Beni Bu Sliman and Ahmar Khaddou and walked to Biskra. Beaten in Seriana at Wadi El Abiod by the commander Saint Germain, Si Abdelhafid fled to Tunisia. 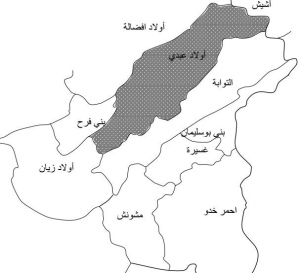 In 1850, the General Saint Arnaud traversed the confederation. His army went through the center of Khenshela and Babar, to Djellal and Khiran, to Oulja and Khanga Sidi Naji.

On June 1, 1850, in Oulja, two soldiers were murdered at night. The General gave the Shawis of the fraction twenty-four hours to deliver the guilty culprits. Instead of obeying, they attempted to escape. The troops hurried after them. Twenty-five fugitives were seized and shot on the field, harvests were burned down and the village of Oulja destroyed. This calmed all attempts at insubordination, and the French authority was henceforth well enough seated in the Jbel Sheshar confederation, able to police them.

Yet, in 1859, the confederation took up the cause again, except for some Shawis of the Beni Imloul. This tribe was prisoner of the marabout Si Saddouq bin El Hajj of Tibermacine. His three sons, organizers of a revolt by the Ahmar Khaddou tribe, were fleeing from General Desveaux. In 1871 and in 1879, the Beni Imloul remained deaf to the excitement of the rebels. When Sherif Mohamed Amezian (bin Abderrahman bin Hocine bin Abdelaziz bin El Haddad of Seddouk Oufella in Kabylia), head of the insurrection of 1879, defeated at R’baa (June 9, 1879), fled, a large number of his followers, believing to find help and protection among the Beni Imloul, went to them, by the valley of Wad Guechtane. They were disappointed. The Beni Imloul ruthlessly raided their fellow believers. They seized all their herds at the passage of Wad El Ma which gorges Wad El Abiod (access to the Meçara plateau), and the insurgents, continuing their escape, went to Zeribet El Wad, under the blows of the Beni Imloul goums. Since that time, and until 1916, Beni Imloul lived in peace solely concerned with its material interests.

Five groups, of which two include the Braja and Wlad Amrane, were a part of the Sidi Naji zawiya.

The Nememsha, a Zenatic confederation mixed with Arab origins, now take over what lies between Tebessa, Negrin oasis, Khenshela and Siar. This is not their homeland. They say they are from the Jbel Sheshar and that they split in the Middle Ages after long quarrels with the Beni Barbar. As far as the memories of the Sheshar Zenata go back into the Middle Ages, they appear to be divided into four groups:

1) The Beni Barbar, who still occupy the Bejer Wadi, from Zawia to Siar. The Nememsha had built “Thakelt Allemoush”, meaning “Village of the Nememsha” in Tashawit, on the edge of this wadi.

2) The Wlad Sultan, who occupy the northern part of Sheshar and are subdivided into Maafa, Ashesh, Tifoura, and Beni Amrane. Maafa are based mainly in Taberga, Beni Amrane in Djellal, Tameït and Zawia. 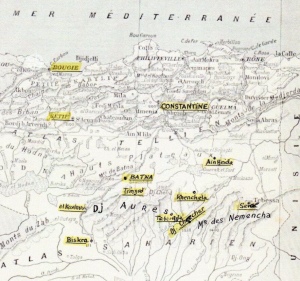 3) The Nememsha; completely isolated from Sheshar today, and have become nomadic, a tribe which includes three fractions: the Wlad R’shash, the Brasha and the Alaouna. The founding ancestor of the Nememsha was a certain Mohamed bin Othman. His three sons produced these three branches and were named after them.

4) The Wlad Khiar, expelled like the Nememsha, and currently fixed in Souk-Ahras.

The large village of Nememsha was on the mountain of Taghit. Beni Barbar’s center was Tizegrarin. As for the Wlad Khiar, their original stronghold has been vainly sought. These four groups still speak the same dialect.

Madame Gibier’s husband was the chief of the SAS in Djellal and then Bu Hammam among the Nememsha. She wrote,

“On an escarpment, the village gourbis huddled together, whose stones melted into the mass of rocks. The few touches of green were those of skinny olive trees. We had our meals, but sympathetic “meals.” An office, an armory, a room for the radio were the domain of the chief of S.A.S., a cramped room dimly lit was added. The layout was spartan, reflecting the living conditions. No running water, a pitcher and a bowl served as sanitary. For my arrival, certain improvements had however been made, not the least of which was the creation of “places of ease”! …It was reached by a rocky path where I happened to meet a snake.

It is said that the Banu Amrane was led by a Moroccan man and whose primary land was dissolved around the 13th century.

The Banu Amrane built Djellal despite being a small group. Many imams in Khenshela are from Djellal (including my great-grandfather, May Allah accept all his efforts).

Wlad Amrane are distinguished from their neighbors, apparently, they use words only said in Djellal and Morocco. For example “house” is أَزَقَّى and “key” is هْنَاسَتْ.

Wlad Amrane took to the village of Wlad Sbaa to finance the revolution.